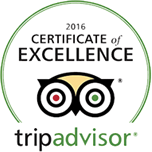 Founded with the mission of bringing unique New Mexican cuisine to Scottsdale diners, Carlsbad Tavern & Restaurant has been serving up authentic, spicy and flavorful food for nearly two decades. Created by Michael P. Capriola and named in homage to Carlsbad Caverns National Park in southern New Mexico, the restaurant opened in 1995 at Scottsdale Road and Earll Drive. The original location was developed with an eclectic New Mexican theme, including bats, Mexican movie posters, Roswell memorabilia and a newspaper menu called The Daily Guano. In 1998, the restaurant moved to Hayden Road, just south of Osborn where the bat cave theme was further developed, making the most of the water feature, The Guano Canal, on the patio and providing a cave-like interior in the dining room and bar.

Read more about us

Wow this was so delicious. We had the green Chile chicken burrito and the enchantment platter. Everything was delicious and authentic New Mexico cuisine. We will be back for sure...I also recommend the Miracle on Hayden margarita. Add the jalapeño of you like spicy. It makes it that much better.

I've passed by this place so many times and I wish I came sooner. Their menu is huge which made it hard to decide but there is something for everyone. I'll be going back to try something new!

...Such great flavors and big portions. Not only was the food amazing but the service was as well! Such a friendly atmosphere and just an overall great vibe! I would suggest this place to everyone!

the food here is the real deal , a chile flavor for all styles , the most intricate flavors I've tasted in a southwestern modeled restaurant . While I plan on coming back regularly , if you have someone who is spicy challenged , make sure to ask for most sauces on side .

It's been awhile since I've been here and man it did not disappoint. Their food is always hot fresh and delicious with the perfect amount of heat. The staff was great and we met the owner today he was very friendly. They have a huge selection of food and a beautiful patio to dine at.